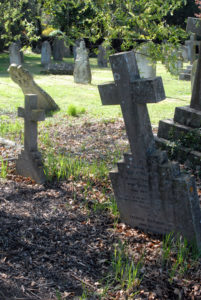 Rev. John Cyprian Rust – Vicar, Councillor, Governor, Philanthropist, Writer and Fund Raiser. Born in 1841, the son of a Baptist turned Anglican clergyman Cyprian Thomas Rust, he eventually became the vicar of St Andrew’s Church for 53 years. In 1914 he also became the Chairman of Soham Parish Council and a Governor of Barway School as well as the Church School in Clay Street. During WW1 he also formed a club to send much needed items to the men fighting at the front.

In 1879 he won the Seatonian prize for his poem Antioch. His sermon at the second World Esperanto Congress (Geneva 1906) was the first known Christian preaching in the language. In 1907 he also translated and in part edited, authored and composed the first Esperanto-language hymn publication – Ordo de Diservo.

He became chairman of the Anglican committee which in 1912, produced the standard Esperanto “Londona” version of the New Testament. Rev Rust is buried in Fordham Road Cemetery Soham, bedside his wife and infant daughter

Spine of Rust’s bible donated to Soham Heritage and Tourism

Inside page of Rust’s Bible with his hand writing and date of 6th December 1917. 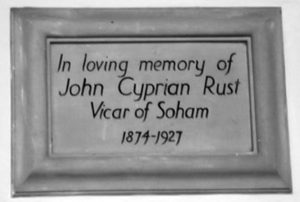 One: Another convivial occasion was the dinner in 1912 to celebrate the fiftieth anniversary of PCDS (the college debating society) H Barrs Davies, as President, was in the chair with the Master as the chief guest. The Vice Chair was taken by the Rev J C Rust, who had been President in 1863. There was a good gathering of ex-Presidents including several Fellows of the college. An extract that mentions Rev Rust from – The book of Adventures by S C Roberts.

Two: A special Anglican Church service, selected and translated from Prayer Book and Bible for use in England by Rev J C Rust. British Esperanto Association

Three: On Wednesday morning the parish church was filled to overflow with a large number of parishioners and inhabitants of neighbouring villages, to witness the marriage of Mr. Arthur Bland, son of Mr. A. Bland, of Larkhall Farm, Fordham, and Miss Elizabeth Mary Taylor, eldest daughter of Mr. J. Taylor, of Soham “Places”. Among the wedding guests we noticed – Mrs. J. Taylor (mother of the bride), Mrs. Bland (mother of the bridegroom); Mrs. W. Jugg, Mrs. Rust, Mrs. Cook, Mrs. G. Townsend, Miss Gifford and Miss Green, Mr. H. Taylor, Mr. R. Cockerton, Mr. Wm. Cockerton, T. B. Whiting, Esq, J.P., Mr. Gifford, Mr. A. Bland, Mr. Maconochie, Mr. W. Jugg, Mr. Wright, Mr. E. Taylor, Mr. G. Townsend, Mr. Green, and Mr. A. Cook. The bride arrived with her father soon after twelve o’clock wearing a dress of white moire and lace. She was attended by four bridesmaids, viz. Misses Florence and Constance Taylor (sisters of the bride), dressed in manoe moire, and Miss Annie Taylor, and Miss Gifford, in lemon moire. The ceremony was performed by the Rev. J. C. Rust, vicar, assisted by the Rev. J. Bell, vicar of Fordham. The Wedding March, was played by organist while the procession was leaving the church, and the bells struck up a merry peal. The numerous bridal presents included the following: –

There were also several presents, &c., from the Lark Hall labourers. The bride and bridegroom left for London via Ely at 4 p.m., and a ball was given at the Place in the evening.

Four: 1901 Apr 17 – A disastrous fire occurred at Soham vicarage. It is really in two parts, the old portion, used by the servants, being connected by a passage with the new wing in which the Rev J.C. Rust and his children were sleeping. The seat of the fire was in the old portion in a room used by the sons of the vicar as a carpenter’s shop. The cook and the housemaid were awakened by stifling smoke and clad only in their night attire, climbed on the roof. Practically the whole of the old wing was gutted, the furniture as wells as the belongings of the servants being destroyed

Five: An interesting wedding was solemnised at the Parish Church on Saturday by the vicar (The Rev. J.C. Rust), the bride being Miss Ada Hobbs, the second daughter of Mr Herbert Hobbs, of Station Road, and the bridegroom Mr Arthur Peacock, fourth son of Mr Robert Peacock, Bushel Lane. The bride, who was neatly attired in a blue costume, was given away by Mr Joe Peacock, the only bridesmaid in attendance being Miss Ida Hobbs, her sister. Following the ceremony about 20 guests were entertained to the wedding breakfast at the home of the bride’s parents, the happy couple afterwards leaving for their future residence.

You can view more information and snippets of Rev Rust on the: soham1914-2014 facebook site. 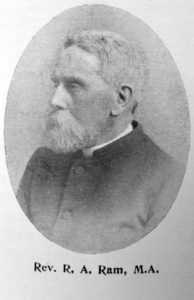 The Reverent Ralph Adye Ram M.A. from Mepal Rectory, was born at Ipswich on 26th January 1845. He was educated at Queen Elizabeth Grammar School in Ipswich and finally at Corpus Chrisiti College, Cambridge. In 1867 he obtained his BA, 2nd class and Tripos MA in 1870. Ram was ordained Deacon in 1869 and priest in 1870 by the Bishop of Norwich. He was the rector of Mepal from 1903 having formerly been curate of St Stephen’s , Norwich (1869 – 73), then St Peter’s, Croydon 1873 – 77. Another accolade was becoming Headmaster of Holbeach Grammer School in 1877 – 91. What has this to do with Soham I hear you cry, well he became the curate of St Andrew’s Church, Soham, under Rev Rust in 1984 until 1903.

Ram married in 1875, the daughter, Annie Davies, of the Rev. W H Johnstone, Vicar of Berden, Essex. They had three daughters.