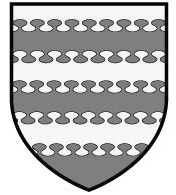 Sir Philip Basset was a knight of Soham in Cambridgeshire and also a Constable of Colchester, Corfe, Devizes, Haddleigh, Oxford and Sherborne Castles, who had risen to the very top of Medieval society. Basset was also a keeper of the Tower of London.

By 1233 one of his brothers, Gilbert, also conveyed land to Philip from their late elder brother Thomas’s estate. Both Basset siblings, had helped to free Hubert de Burgh from captivity in Devizes Castle in Wiltshire. In return for this service, Hubert gave him 176 acres of his demesne in Soham Cambridgeshire with lordship over its numerous tenants. In 1238-9 he was also granted lands in Soham and Fordham by Peter de Bendenges and his wife Burga. By 1245 Philip had obtained a license to build a chapel in Soham and hold services therein. Unfortunately, there are no details as to where this chapel was constructed within the town. By 1262 John de Burgh and Hawise his wife, had also leased lands in Soham to Philip too, for a term of 16 years.

Having been outlawed by the famous Earl Marshal, for freeing Hubert de Burgh, it took one year and the death of the said Earl, to be pardoned again on 8th June 1234.

When King Henry III left for France in November 1259, Philip was later made Justiciar of England on 24th April 1261. Hugh Despencer, was Bassett’s son in law and they seem to have acted in this Justiciar role concurrently. One notable event happened on 13th May 1264 however. Philip fought at Lewes with the most determined gallantry. When his son in law, Despencer, entreated him to surrender he replied, “I will not yield so long as I can stand upright.” Philip was as good as his word. He didn’t surrender, nor was he made a prisoner until his body had been covered with wounds.

After a public career of nearly 40 years, Philip Basset died on 29th October 1271 and was buried at Stanley in Wiltshire. His daughter Aline, sole heiress and widow of Hugh Despencer soon remarried, choosing Roger Bigod, 5th Earl of Norfolk and Marshal of England. During his life, Philip established a reputation for integrity unequalled in the era in which he lived.