A Fen is the local term for an individual area of marshland or former marshland and also designates the type of marsh typical of the area.

Fenland primarily lies around the coast of the Wash, it reaches into four counties: Lincolnshire, Cambridgeshire, Norfolk and a small area of Suffolk, as well as the historic county of Huntingdonshire. In whole, it occupies an area of nearly 1,500 sq mi (3,900 km2).

Most of the Fenland lies within a few metres of sea level. With the support of a drainage system, the Fenland has become a major arable agricultural region. The Fens are particularly fertile, containing around half of the grade one agricultural land  in England

The Fens have also been referred to as the “Holy Land of the English” because of the former monasteries, now churches and cathedrals, Crowland, Ely, Peterborough, Ramsey and Thorney. Other significant settlements in the Fens include: Boston, Cambridge, Spalding and Wisbeach.

Without artificial drainage and flood protection, the Fens would be liable to periodic flooding. Some areas of the Fens were once permanently flooded, creating small lakes or  meres, as Soham had, while others were only flooded during periods of high water. In the pre-modern period arable farming was limited to the higher areas of the surrounding uplands, the fen islands and the so-called “Townlands”, an arch of silt ground around the Wash where the towns had their arable fields. Though these lands were lower than the peat fens before the peat shrinkage began, the more stable soils were reclaimed by medieval farmers and embarked against any floods coming down from the peat areas or from the sea. The rest of the Fenland was dedicated to pastoral farming, fishing, fowling and the harvesting of reeds or sedge for thatch. In this way, the medieval and early modern Fens stood in contrast to the rest of southern England, which was primarily an arable agricultural region. 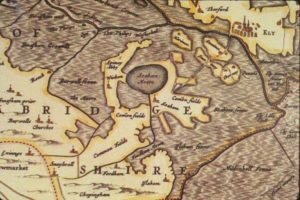 The Cambridgeshire Lodes are a series of man-made waterways, believed to be Roman in origin, located in the county of Cambridgeshire. Bottisham, Swaffham Bulbeck, Reach, Burwell, Wicken and Monks Lodes all connect to the River Cam, while Soham Lode connects to the Great Ouse. All have been navigable historically.

Soham Lode is more recent than most, probably dating from the 1790s. It ran by Soham Mere, a large inland lake which was drained in the late 18th century.

Soham Lode runs for about 7 miles (11 km) from the river Great Ouse about 1 mile (1.6 km) below its junction with the River Cam. Its origin is less well known than the other lodes, but it probably dates from the 1790s, when it was built to reduce flooding in the Soham and Fordham area, by carrying water from the River Snail, which formerly flowed into the River Lark, to join the Great Ouse instead. Soham is about halfway along it, and was once close to a large inland lake called Soham Mere, which was drained in the late 18th century. 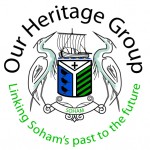 There is no evidence that the Lode was navigable beyond Soham. Lighters brought cargoes of corn to a water mill at Soham, and later brought coal when steam engines replaced the water wheel. Barley and timber were other important cargoes. If you take a closer look at our Heritage and Tourism logo you will see that a Fen Lighter forms the very top of the heraldic symbol. This brings the history of our water ways into focus. The railways however, did not reach Soham until 1879, and resulted in the rapid demise of water-borne transport. Commercial traffic ceased about 1900, and the lode was described as un-navigable in a report by H. Dunn in 1906.

There was a sluice at the entrance to the lode, with two sets of mitre gates, pointing in opposite directions, one to prevent flood waters from the Great Ouse entering the lode, and the other to raise the water level in the lode to make navigation easier. When the Anglian Water Authority was created by Act of Parliament in 1977, the lode was not listed as a navigation, and their successors, the Environment Agency, have taken this to mean that there is no right of navigation.