Anna or Onna, was king of East Anglia from the early 640s until his death. He was a member of the Wuffingas family, the ruling dynasty of the East Angles. He was one of the three sons of Eni who ruled the kingdom of East Anglia succeeding some time after Ecgric was killed in battle by Penda of Mercia. Anna was praised by Bede for his devotion to Christianity and was renowned for the saintliness of his family: his son Jurmin and all his daughters – Seaxburh, Aethlthryth, Aethelburh and possibly a fourth, Wihtburh – were canonised. 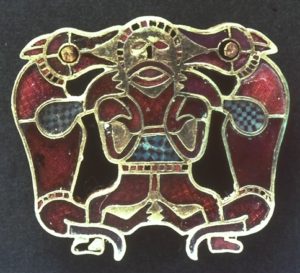 Little is known of Anna’s life or his reign, as few records have survived from this period. In 631 he may have been at Exning, close to Devil’s Dyke. In 645 Cenwaih of Wessex was driven from his kingdom by Penda and, due to Anna’s influence, he was converted to Christianity while living as an exile at the East Anglian court. Upon his return from exile, Cenwalh re-established Christianity in his own kingdom and the people of Wessex then remained firmly Christian.

Around 651 the land around Ely was absorbed into East Anglia, following the marriage of Anna’s daughter Æthelthryth. Anna was forced to flee into exile. He returned to East Anglia in about 653, but soon afterwards the kingdom was attacked again by Penda and at the Battle of Bulcamp the East Anglian army, led by Anna, was defeated by the Mercians, and Anna and his son Jurmin were both killed. Anna was

The kingdom of East Anglia was a small independent Anglo Saxon kingdom that comprised what are now the English counties of Norfolk and Suffolk  and perhaps the eastern part of the Cambridgeshire Fens.

In 631 Anna was probably at the Suffolk village of Exning, an important settlement with royal connections, and, according to the Liber Eliensis, the birthplace of his daughter Æthelthryth. (Ethelreda). Exning was an important place strategically, as it stood just on the East Anglian side of the Devil’s Dyke, a major earthwork stretching between the Fen edge and the headwaters of the River Stour, built at an earlier date to defend the East Anglian region from attack. An early Anglo-Saxon cemetery discovered there suggests the existence of an important site nearby, possibly a royal estate or region.

Anna arranged an important diplomatic marriage between his daughter Seaxburh and Eorcenberht of Kent, cementing an alliance between the two kingdoms. It was by means of marriages such as this that the kings of Kent could become well-connected to other royal dynasties. Not all of Anna’s daughters were married into other royal families. During the 640s Anna’s daughter Æthelburg and his stepdaughter Sæthryth entered  Faremoutiers Abbey in Gaul  to live religious lives under abbess Fara. They were the first royal Anglo-Saxons to become nuns, making religious seclusion “an acceptable and desirable vocation for ex-queens and royal princesses”, according to Barbara Yorke. 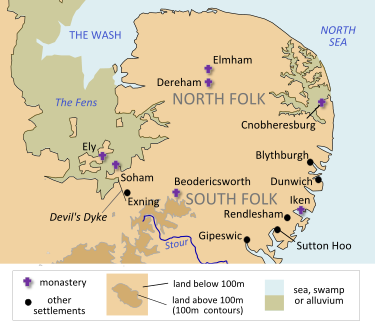 The kingdom of East Anglia during the reign of Anna 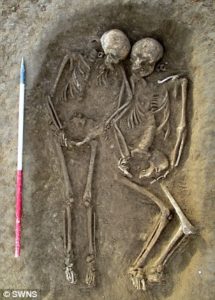 Bodies recently discovered along Burwell Road, Exning. They date from Anna’s time and grave goods found with them were of such quality that some believe the bodies these goods belonged to could be Royal?

Anna’s children were all canonised. The eldest, Seaxburh, was the wife of Eorcenberht of Kent. She ruled Kent from 664 until her son Ecgberht came of age. Aethelthryth, according to the Anglo-Saxon Chronicle, founded the monastery at Ely in 673. Another daughter,  Aethelburgh, spent her life at the nunnery of Faremoutiers. Anna’s son, Jurmin, was of warrior age in 653 when he was killed in battle.

By tradition, Anna is said to have had a fourth daughter, Wihtburh, an abbess at Dereham, where there was a royal double monastery. She may never have existed: Bede fails to mention her and she first appears in a calendar in the late 10th century Bosworth Psalter. She may have been a character specifically created by the religious community at Ely, where her remains were supposed to have been taken after being stolen from Dereham and subsequently used as visual proof of the incorruptibility of a saint’s body, a substitute for her sister Æthelthryth, whose body had to remain unexamined in her tomb. Manuscript F of the Anglo-Saxon Chronicle, which dates from about 1100, mentions Wihtburh’s death when it records that her body was found uncorrupted in 798, 55 years after she died. The resulting date for her death of 743 is too far too late for her to have been a sister of Æthelthryth, who was born in 636.

Æthelthryth or Etheldreda; c. 636 – 23 June 679 AD) or Audrey. She was an East Anglian princess, a Fenland and Northumbrian queen and Abbess of Ely. She was pr 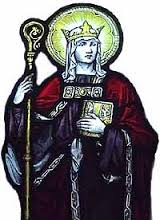 obably born in Exning, and was one of the four? saintly daughters of Anna of East Anglia, all of whom eventually retired from secular life and founded  abbeys.

Æthelthryth made an early first marriage in around 652 to Tondberct, chief or prince of the South Gyrwe. She managed to persuade her husband to respect her vow of perpetual virginity that she had made prior to their marriage. Upon his death in 655, she retired to the Isle of Ely, which she had received from Tondberct as a morning gift. Æthelthryth was subsequently remarried for political reasons in 660, this time to Ecgfrith of Northumbri. Shortly after his accession to the throne in 670, Æthelthryth became a nun. This step possibly led to Ecgfrith’s long quarrel with  Wilfri,  bishop of .York. One account relates that while Ecgfrith initially agreed that Æthelthryth should continue to remain a virgin, in about 672 he wished to consummate their marriage and even attempted to bribe Wilfrid to use his influence on the queen to convince her. This tactic failed and the king tried to take his queen from the cloister by force. Æthelthryth then fled back to Ely with two faithful nuns and managed to evade capture, thanks in part to the miraculous rising of the  tide. Another version of the legend related that she halted on the journey at ‘Stow’ and sheltered under a miraculously growing ash tree which came from her staff planted in the ground. Stow came to be known as ‘St Etheldred’s Stow’, when a church was built to commemorate this event. According to the Anglo Saxon Chronicle, Æthelthryth founded a double monastery at Ely in 673, which was later destroyed in the Danish invasion of 870.

Bede told how after her death, Æthelthryth’s bones were disinterred by her sister and successor, Seaxburh and that her uncorrupted body was later buried in a white, marble coffin. In 695, Seaxburh translated the remains of her sister Æthelthryth, who had been dead for sixteen years, from a common grave to the new church at Ely. The Liber Eliensis describes these events in detail. When her grave was opened, Æthelthryth’s body was discovered to be uncorrupted and her coffin and clothes proved to possess miraculous powers. A sarcophagus made of white marble was taken from the Roman ruins at Grantchester, which was found to be the right fit for Æthelthryth. Seaxburh supervised the preparation of her sister’s body, which was washed and wrapped in new robes before being reburied. She apparently oversaw the translation of her sister’s remains without the supervision of her bishop, using her knowledge of procedures gained from her family’s links with the Faremoutiers Abbey as a basis for the ceremony. After Seaxburh, Æthelthryth’s niece and her great-niece, both of whom were royal princesses, succeeded her as abbess of Ely.

St Etheldreda’s Church in Ely Place in Holborn is dedicated to the saint. It was originally part of the palace of the bishops of Ely. After the English Reformation,, the palace was used by the Spanish ambassadors, enabling Roman Catholic worship to continue in the church.

St Etheldreda’s Church, Hatfield is 13th century and was originally Saxon. It was named for Saint Etheldreda because it was adjacent to the Palace of the Bishops of Ely who held her as their patron saint.

St Etheldreda’s is a Roman Catholic parish church in Ely, Cambridgeshire. It is part of the Diocese of East Anglia within the Province of Westminster. The church contains the shrine and relics of Æthelthryth, including her hand.

St.Etheldreda’s Church in White Notley, Essex, is a Church of England parish church, of Saxon construction, built on the site of a Roman temple, with a large quantity of Roman brick in its fabric. The church has a small Mediaeval English stained glass window, depicting St. Etheldreda, which is set in a stone frame made from a very early Insular Christian Roman Chi Rho grave marker.

The common version of Æthelthryth’s name was St. Audrey, which is the origin of the word tawdry, which derived from the fact that her admirers bought modestly concealing lace goods at an annual fair held in her name in Ely. By the 17th century, this lacework had become seen as old-fashioned, or cheap and of poor quality, at a time when the Puritans of eastern England looked down on any form of lacy dressiness.