St Felix and his Soham Abbey? 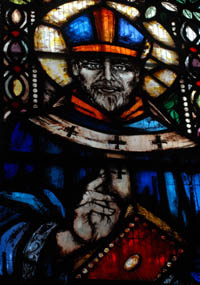 St Felix – an extract from the 1884 Soham Parochial Magazine.

There is only a vague and uncertain indication of the existence of Offa, or Uffa, called the first king of East Angles. By one account, there was one Uffa who landed in 526, another who founded the kingdom in 571. We learn from Bede that from Uffa of 571, The East Anglian kings were called Uffingas, that is, sons of Uffa; but their annals have been almost wholly lost.

St Felix, who was brought from Burgundian territory by Sigebert, the learned one of the East Anglian kings, and who was the first Bishop of the East Angles, is said to have founded a monastery here about AD 630, ands to have made Soham the seat of his diocese prior to the removal of the see to Dunwich, (dun, a hill-fortress wich or wick a bay; sometimes called Dommoc), a seaport on the coats of Suffolk, now almost annihilated by the ocean. Under the Conqueror, Dunwich, though no longer an Episcopal city, had 236 burgesses and 100 poor; and it was prosperous under Henry II. It is reported to have had fifty religious foundations, including churches, chapels, priories and hospitals. Camden, writing in 1607 says ‘it then lay in solitude and desolation’. The greater part being submerged. St Felix was Bishop seventeen years, having been consecrated about 631 by Archbishop Honorius. His episcopate was so full of happiness for the cause of Christianity hat the historian Bede describes his work with an allusion to the good omen of his name. (Felix – meaning happy). Bede says of him that ‘he delivered all the province of East Anglia from long standing unrighteousness and unhappiness’; as ‘a pious cultivator of the spiritual field, he found abundant faith in a believing people’. It has been said that in no part of England was Christianity more favourably introduced. An important feature of his mission was the combination of education with religion by means of a school such as existed at Canterbury in connection with the house of Saints Peter and Paul. This school, for which Felix provided teachers ‘after the model of Kent’, was probably attached to the primitive East Anglian Cathedral at either Dunwich or Soham.

The labours of St Felix as an evangelizer, and educator and a church ruler, were closed on the 8th March, 647. He was buried in his own city of Dunwich; and it is interesting to find memory of the apostle of East Anglia preserved in the name not only of Fleixstowe to the south-east of Ipswich, but in that of a Yorkshire Village, far away in the north Feliskirk, (the church of Felix) near Thirsk.

His remains were shortly removed to Soham and interred in the chancel of the cathedral church which he had founded. This step was doubtless taken lest the Danes should get possession of them. In king Canute’s time, about 1031, they were again removed by a monk named Etheric to Ramsey and were ‘solemnly enshrined by Abbot Ethelstan’. The Bishops of East Anglia had jurisdiction over the county of Cambridge till 809AD, at which time king Egbert, having conquered the whole land, that is south of the river Humber, divided the same into several bishoprics, and then Cambridgeshire was included in the diocese of Lincoln till 1109.

Richard, the last of the abbots of Ely, obtained the consent of King Henry I to a scheme for converting the Abbey of Ely into a Bishopric; and after much negotiation the change was effected in 1109 by the appointment of Herve le Breton, Bishop of Bangor as first Bishop and Cambridgeshire was thence under the jurisdiction of the Bishops of Ely.

It was this Herve or Hervey who made a causeway from Ely to Soham through the Fens in about 1120AD.