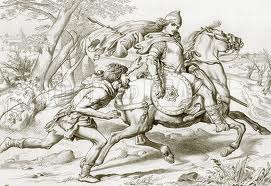 According to the Gesta Herewardi, Hereward was exiled at the age of eighteen for disobedience to his father and disruptive behaviour. He was declared an outlaw by Edward the Confessor. At the time of the Norman invasion of England, he was still in exile in Europe, working as a successful mercenary for the Count of Flander, Baldwin V. According to the Gesta he took part in tournaments in Cambrai. At some point in his exile Hereward is said to have married Turfida, a Gallo-Germanic woman from a wealthy family in  Saint-OmerSaint. She is said in theGesta to have fallen in love with him before she met him, having heard of his heroic exploits.

Hereward returned to England in late 1069 or 1070. The Gesta says that he discovered that his family’s lands had been taken over by the Normans and his brother killed with his head then placed on a spike at the gate to his house. Hereward took revenge on the Normans who killed his brother. He allegedly killed fifteen of them with the assistance of one helper. He then gathered followers and went to Peterborough Abbey to be knighted by his uncle Abbot Brand. He returned briefly to Flanders to allow the situation to cool down before returning to England.

In 1070 Hereward certainly participated in the anti-Norman insurrection centred on the Isle of Ely. In 1069 or 1070 the Danish king Sweyn Estrithson sent a small army t o try to establish a camp on the Isle of Ely. Hereward appears to have joined them. Hereward stormed and sacked Peterborough Abbey  in company with local men and Sweyn’s Danes. While the Gesta says this was after the main battle at Ely, the Peterborough Chronicle says it was before. His justification is said to have been that he wished to save the Abbey’s treasures and relics from the rapacious Normans led by the new Norman abbot who had ousted his uncle Brand. According to the Gesta he returned the treasures looted from the abbey after having a vision of Saint Peter. However, the Peterborough Chronicle says that the treasure was carried off to Denmak.

Hereward was then joined by a small army led by Morcar, the former Saxon Earl of Northumbria who had been ousted by William. William sent an army to deal with the rebels. In 1071, Hereward and Morcar were forced to retreat to their stronghold and made a desperate stand on the Isle of Ely against the Conqueror’s rule. Both theGesta Herewardi and the Liber Eliensis claim that the Normans made a frontal assault, aided by a huge, mile-long timber causeway, but that this sank under the weight of armour and horses. The Normans then tried to intimidate the English with a witch, who cursed them from a wooden tower, but Hereward managed to set a fire that toppled the tower with the witch in it. The Gesta includes other fantastical tales about Hereward’s prowess, including disguising himself as a potter to spy on the king and escaping from captivity.

It is said that the Normans, probably led by one of William’s knights named Belasius (Belsar), then bribed the monks of the island to reveal a safe route across the marshes, resulting in Ely’s capture. Morcar was taken and imprisoned, but Hereward is said to have escaped with some of his followers into the wild fenland and to have continued his resistance. This escape is noted in all the earliest surviving sources.

There are conflicting accounts about Hereward’s life after the fall of Ely. The Gesta Herewardi says Hereward attempted to negotiate with William but was provoked into a fight with a man named Ogger. The fight led to his capture and imprisonment. His followers, however, liberated him when he was being transferred from one castle to another. Hereward’s former gaoler persuaded the king to negotiate once more, and he was eventually pardoned by William and lived the rest of his life in relative peace. It also says that he married a second wife after Turfida entered a convent. She is said have been called Alftruda and was the widow of Earl Dolfin.

Geoffrey Gaimar, in his Estoire des Engleis, says instead that Hereward lived for some time as an outlaw in the Fens, but that as he was on the verge of making peace with William, he was set upon and killed by a group of Norman knights. It is also possible that Hereward received no pardon and went into exile, never to be heard from again; this was in fact the fate of many prominent Englishmen after the Conquest. Ogger (“Oger the Breton”), either the person Hereward is supposed to have fought or an heir, appears to have taken over his lands in Bourne, Lincolnshire, after his death.

The fact of Hereward’s participation in the events at Ely is attested in early documents such as the Anglo-Saxon Chronicle, 1071, another text of the Chronicle also tells of his involvement in the looting. Early sources say nothing about him other than the fact that he was at Ely and that he led the last band of resisters. L’Estoire des Engles (c1140) says that he had a noble family, but is unspecific. His alleged genealogy is given in the Gesta and the later Historia Croylandensis, though with some variations. By the fifteenth century, the Wake family were claiming descent from him and elevating his ancestry by asserting that he was the son of Leofric, Earl of Merciaand Lady Godiva.