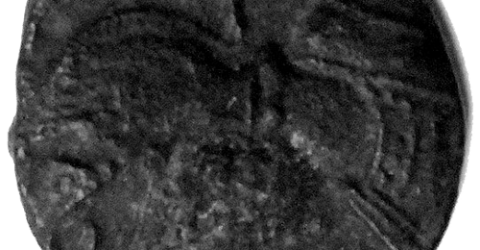 A similar, if not the same type of coin, found by Archeologist’s on Soham’s Fordham Road development recently, has been unknowingly in Soham since 1980.

The 1.6cm, bronze coin was found in a spoil heap, from a housing development in a neighboring county. Archeologists had surveyed an area of the site and found nothing, but it seems they were roughly 200 feet off. Soon after the archeologists left, the developers found a Roman road, cemetery, with countless bodies and artifacts; one of which was the coin that now resides in Soham, with a member of the original finders family.

Due to the interest raised by the Fordham Road find, the owner has kindly agreed to display the coin for all to view, along with other artifacts including: iron age pot shards, coins, pins, brooches and rings. More information on this display will follow shortly.

N.B. The Archeology team and developer responsible for the site have full knowledge of the items found and have been supplied with a very detailed map as to where the items were originally located. Permission to keep the items was granted.

Rome, it was said, was founded by the twins Romulus and Remus. Of course, this was a myth. Romulus and Remus were the supposed children of the god Mars and a vestal, Rhea Silvia. As babies, they were exposed in the wild, and were suckled by a wolf. Later, when they decided to found a city, they argued about which hill was better, and in the quarrel, Remus was killed.

The “wolf and twins” motif appeared on many Roman coins, from the Republic onwards. The coin shows a representation of Roma on it’s face, a personification of the city.