Geoffrey, was remarkable for his prudence, inflexible spirit in adversity, and military skill. His wealth and his honours raised him above all the nobles of the realm. This lead to jealously, particularly amongst those who were connected with the king of the time – Stephen (B: 1092 or 1096, Reign: 22 December 1135 – 25 October 1154) 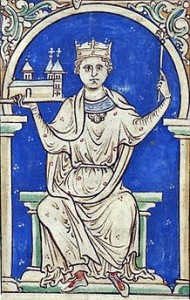 De Mandeville succeeded his father, William, sometime before 1129. A key portion of the family patrimony in Essex was in the King’s hands. William had incurred a debt to the crown, perhaps in part due to a large fine levied by Henry I, due to his displeasure at the escape of an important political prisoner when William was in charge of the Tower of London.  The King also held the substantial estate of Geoffrey’s maternal grandfather Eudo le Dapifer to which Geoffrey laid claim.

Geoffrey’s goal seems to have been to gain Eudo’s lands and his father’s offices. He succeeded in this during the shifting tides of fortunes of the two competitors for the English throne after King Henry I’s death in 1135. He initially supported Stephen, who made him Earl of Essex. In 1141 the new earl was also appointed custodian of the tower of London by the Empress Matilda.  He founded a Benedictine priory (later Walden Abbey) at Walden, Essex and constructed a castle there.

After the defeat and capture of Stephen at Lincoln early in 1141, Earl Geoffrey, like many barons, acknowledged Stephen’s rival Matilda as his sovereign lady. She confirmed his custody of the Tower, forgave the large debts his father had incurred to the crown, granted him the Norman  lands of Eudo le Dapifer, and appointed him Sheriff of Essex and Hertfordshire, Middlesex and London. But when Stephen was released in December of that year, he returned to his original allegiance. There has been much scholarly debate over the dating of the charters he received from King Stephen and Empress Matilda. Depending on the order and timing of those documents, either Geoffrey appears to have been playing off one against the other to get what he wanted or his support was courted by the rival claimants to the throne. The king arrested the earl in 1143 and, threatened with execution, Geoffrey surrendered his castles of Pleshey and Saffron Walden as well as custody of the Tower of London to Stephen. In reaction, Earl Geoffrey launched a rebellion.

Geoffrey assembled many friends and mercenary soldiers to him. With this force, he devastated the whole country by fire and sword; sparing no one. The town of Cambridge was taken by surprise, and set on fire. He then set about ravaging the whole area.

As soon as the king heard of this he hastened out to bring Geoffrey down. But Geoffrey skilfully avoided the king, taking himself into the marshes of the Fens, the Isle of Ely and Ramsey Abbey. He made the Abbey his headquarters during this time. There he formed a friendship with Hugh Bigod.

The Bigod’s
Rodger Bigod, Hugh’s grandfather, owned Soham Manor. He was awarded this substantial estate in East Anglia plus six lordships in Essex, 117 in Suffolk and 187 in Norfolk too! After the death of his elder brother William, who perished without issue in the sinking of the White Ship on 26 November 1120, Hugh was allowed to inherit his brother’s office of royal steward and many estates in East Anglia. Geoffrey De Mandville was also Hugh Bigod’s, first wife’s brother in law. Though defeated and compelled to surrender his castles after the rebellion, Bigod kept his lands and his earldom, and lived at peace with Henry II, who took the throne after Stephen until Hugh’s death in 1177 in Palestine. 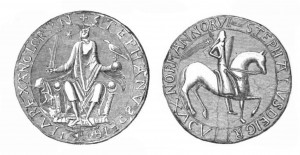 As for Geoffrey, he was besieged by King Stephen and met his death in September 1144 in consequence of an arrow wound received in a skirmish. Geoffrey’s punishment in death was to be excommunicated, unabsolved and denied a Christian burial. His body was wrapped in lead and taken by the Templar community in London. He was buried in the Temple Church in London and son arranged for an effigy to be placed on the floor, where it can still be seen today.

NB: The famous Boleyn family, (Anne Boleyn being the second wife of Henry VIII and mother of Queen Elizabeth I), can trace their ancestry back to Geoffrey via his daughter Beatrice de Mandeville.