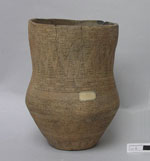 While the Neolithic cultures were flourishing, fresh bands of continental immigrants entered Britain. These were the Beaker People, so named from their distinctive pottery. They evidently landed at various times and places on the south and east coasts, whence they spread over most of the country, penetrating, and probably dominating, the Neolithic societies. Beaker people ranged extraordinarily widely over the Continent, but those who reached Britain seem to have come mainly from northwest Europe. .

Most of our fragmentary knowledge of the Beaker people comes from their burials. Unlike the Neolithic settlers, they buried dead in individual graves, a practice which has remained ever since, in one form or another, and the prevailing burial rite in this country. Most Beaker burials are inhumations, sometimes under round barrows, accompanied by a few grave goods.

The Beaker people are further distinguished from the purely Neolithic societies because they introduced into Britain the use of metal artefacts. Knowledge of metalworking, first in copper, and later in bronze, had been spreading through Europe from its place of origin in the Near East while the British Neolithic pottery already described was in use, but metal objects have never been found with that pottery. A very few primitive metal goods have, however, come from British Beaker burials. It is generally believed that the Beaker people did not themselves make these goods but imported them from Ireland and the Continent. They are therefore often regarded as a Neolithic rather than a Bronze-Age group.

Other evidence shows that the Beaker people kept livestock and cultivated flax and cereals, growing much more barley than wheat. They were perhaps the first inhabitants of Britain to use woven fabrics. Archery played an important part in their lives. Little is known of their dwelling-places; but the wide diffusion of their pottery suggests a mobile and energetic people, and their grave goods indicate fairly extensive trading activities.

The most characteristic and extensively studied item in the Beaker people’s equipment is their pottery. Beaker pottery is flat-based and usually of good quality ware, sometimes polished on the outside and almost always decorated with impressed ornament in patterns which may often have originated as copies of basketry and wooden vessels.

One such ‘beaker’ was found in Clipsal’s field in Soham and is now housed in the Ashmolean Museum in Oxford.

Categories: Features
← The Most Haunted House in Soham…
The de Burgh Brothers →