Queen Philippa of Hainault – One time owner of Soham Manor 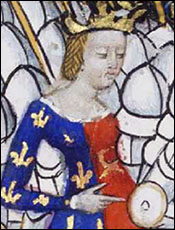 King Edward III of England, included the whole of Soham manor, reunited as part of the royal demesne, in the dower of his queen, Philippa of Hainault.

Philippa, who retained Soham until her death in 1368, leased her manor from c. 1340 probably until the 1360s to the neighbouring priory of Ely. In 1370 the king granted a life interest in Soham to the military commander Sir Robert Knolles and his wife Constance.

Philippa was born in Valencienne in the County of Hainault in the Low Counties, a daughter of William I, Count of Hainault and Joan of Valois, Countess of Hainault, granddaughter of Philip III of France. She was one of eight children and the second of five daughters.

King Edward II had decided that an alliance with Flanders would benefit England and sent Bishop Stapledon of Exeter on the Continent as an ambassador. On his journey, he crossed into the county of Hainaut to inspect the daughters of Count William of Hainaut, to determine which daughter would be the most suitable as an eventual bride for Prince Edward. The bishop’s report to the king describes her in detail:

The lady whom we saw has not uncomely hair, betwixt blue-black and brown. Her head is clean-shaped; her forehead high and broad, and standing somewhat forward. Her face narrows between the eyes, and the lower part of her face is still more narrow and slender than her forehead. Her eyes are blackish-brown and deep. Her nose is fairly smooth and even, and yet it is no snub-nose. Her lips somewhat full, and especially the lower lip. Her lower teeth project a little beyond the upper; yet this is but little seen. Her ears and chin are comely enough. Her neck, shoulders, and all her body are well set and unmaimed; and nought is amiss so far as a man may see. Moreover, she is brown of skin all over, and much like her father; and in all things she is pleasant enough, as it seems to us. And the damsel will be of the age of nine years on St. John’s day next to come, as her mother saith. She is neither too tall nor too short for such an age; she is of fair carriage, and well taught in all that becometh her rank, and highly esteemed and well beloved of her father and mother.

Philippa married Edward III at York Minster, on 24 January 1328, eleven months after his accession to the English throne. Unlike many of her predecessors, Philippa did not alienate the English people by retaining her foreign retinue upon her marriage. As Isabella (Edwards mother) did not wish to relinquish her own status, Philippa’s coronation was postponed for two years. She eventually was crowned queen on 4 March 1330 at Westminster Abbey when she was almost six months pregnant; and she gave birth to her first son, Edward, the following June.

In October 1330, King Edward commenced his personal rule when he staged a coup and ordered the arrest of his mother and her lover, Mortimer. Shortly afterward, the latter was executed for treason, and Queen Dowager Isabella was sent to Castle Rising in Norfolk, where she spent a number of years under house arrest.

Philippa accompanied Edward on his expeditions to Scotland, and the European continent in his early campaigns of the Hundred Years War where she won acclaim for her gentle nature and compassion.

She served as regent of England during the absence of her spouse in 1346. Facing a Scottish invasion, she gathered the English army and met the Scots in a successful battle near Neville’s Cross: she rallied the English soldiers on horse before them prior to the battle, which resulted in an English victory and the Scottish king being taken prisoner.

Phillipa had given birth to thirteen children and outlived eight of them. Three of her children died of the Black Death in 1348.

On 15 August 1369, Philippa died of an illness similar to *Edema in Windsor Castle. She was given a state funeral six months later on 9 January 1370 and was interred at Westminster Abbey. Her tomb was placed on the northeast side of the Chapel of Edward the Confessor and on the opposite side of her husband’s grandparents Edward 1st and Eleanor of Castile and great grandfather Henry III. Her alabaster effigy was beautifully executed by sculptor Jean de Liège. Eight years later Edward III died and was buried next to Philippa. By all accounts, her forty-year marriage to Edward had been happy.

After the death of his queen, Philippa, in 1369, Edward fell under the influence of Alice Perrers, his mistress, who was regarded as corrupt and grasping.

*Edema, also known as fluid retention or swelling, is the build-up of fluid in the body’s tissue. Most commonly the legs or arms are affected.

Causes may include: venous insufficiency, heart failure, kidney problems, low protein levels, liver problems, deep vein thrombosis, infections and angioedema. It may also occur due to prolonged sitting or standing and during menstruation or pregnancy. The condition is more concerning if it starts suddenly, or pain or shortness of breath is present.